My new favorite vessel to cook in these days is an iron skillet. The way it conducts heat and cooks is really amazing. It is so versatile. You can make everything from pasta, a giant cookie or brownie, meatballs, eggs, bread, and potatoes. It’s magical what you can make with an iron skillet. Plus it looks really cool too! I have been cooking a variety of different recipes in iron skillets but I wanted to try a new out especially for the holiday season. Baked Skillet Sweet Potato au Gratin is literally a mouth watering Thanksgiving holiday side dish. Forget about topping your sweet potatoes with marshmallows this year. Sweet potato au gratin style is the way to go.

Cinnamon is just one of those spices that warms you from the inside out. I love the smell and taste of it. It is so versatile to use both in savory and sweet dishes. Also the different varieties of cinnamon taste so unique. When I bake I prefer to use Siagon Cinnamon because it tastes a bit sweeter and you don’t have use as much sugar it seems like when you use this variety of cinnamon. Ceylon cinnamon is what is called a “true cinnamon”. The Siagon cinnamon has stronger cassia which brings out the more intense flavor. For this cinnamon bechamel recipe I wanted something more subtle since we are getting plenty of sweet flavor from the scalloped sweet potatoes. Of course you can still use Siagon Cinnamon for the sauce (the sweeter the better haha!).

Change up the traditional to this more unique and very Thanksgiving inspired recipe. 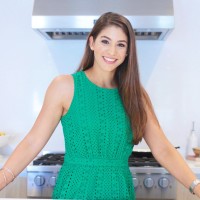 Stay up to date on the latest recipes and nutrition articles. Sign up for the weekly newsletter HERE!

GREAT FOR:To refresh your eating habits and get on track with your healthy habits.A jumpstart kick in the butt to get you on a journey of healthy eating. LEARN MORE

GREAT FOR: Learning how to stop dieting and reach long term health success. You will learn to create a healthy balance through meal plans, nutrition education and consultations. LEARN MORE